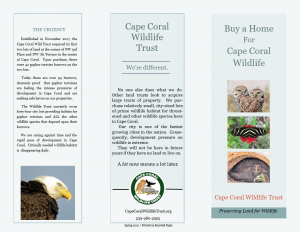 The Florida burrowing owl and gopher tortoise are designated a threatened species by Florida Fish and Wildlife Conservation Commission.

The designation of \"Threatened\" is given to species whose prospects of survival are in jeopardy due in part to commercial and residential development. 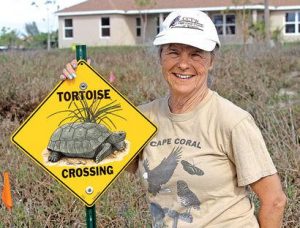 Did you know that the City of Cape Coral has Burrowing Owl and Gopher Tortoise protection ordinances? Those who intentionally harass or harm the burrowing owls/ gopher tortoises or collapse their burrows will be subject to penalties ranging from a $500 fine to 60 days in jail.

Research by Dr. John Herman of Florida Gulf Coast University demonstrated that \"the urban gopher tortoise populations in Cape Coral represent a self-sustaining viable conservation unit.\" For this reason, Professor Herman \"fully supports and encourages the establishment of a land trust of current vacant lots…for the conservation of gopher tortoises specifically and wildlife in general.\"

In fact, more than 350 other species - burrowing owls, coyotes, snakes, foxes, mice and more use tortoise burrows to seek shelter and escape heat, fires, and predators. The gopher tortoise is considered a \"keystone species.\" Conservation Biologist Rachel King of Florida Fish & Wildlife further explained \"If they disappear from the environment, the ecosystem will collapse on itself.\"

CCWT's goal is to create mini neighborhood eco-preserves all over the City.

Not only will this plan ensure that burrowing owls, gopher tortoises and other wildlife will be protected, but it will provide opportunities to educate residents and visitors. Cape Coral is one of the fastest growing cities in the US*

Every lot we acquire is one less lot developed.

In 2018 we purchased the first lot at 305 NW 7th Terrace with more than 38 active tortoise burrows surrounded by nature-loving homeowners. As of December 5, 2021, we own 44 city properties within 14 parcels. The land will continue to be home to generations of burrowing owls and gopher tortoises who will live in peace forever.

We are always looking for burrowing owl and/or gopher tortoise lots to acquire.

There are dozens of pieces of land with multiple owl and/or tortoise burrows. When the right one comes along, CCWT will require funds to purchase it. 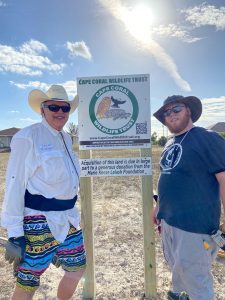 This is where you come in...

Do you own a lot where burrowing owls or gopher tortoises have taken up residence? Would you like to consider donating one or more of those lots? How about leaving a property to CCWT in your will? Perhaps you would be willing to sell your property to us at a reasonable price?

If you are interested in supporting this cause, please contact us to find out exactly how you can help.

The march toward a projected \"build-out\", (population of 400,000) is unstoppable. We are confident that with the help of people who love and value the environment, that march may be slowed, detoured and perhaps, in some places, halted.

How to donate to CCWT

or mail a check to:

breeding or breeding season is unlikely to result in take, provided the action is infrequent, the action is of short duration (less than 5 minutes), the person uses careful foot placement to avoid collapse of the burrow, and the person avoids any contact between equipment and owls that may be present at the burrow entrance.

- Care should be taken not to trim vegetation too close to the ground, which can lead to erosion into the burrow entrance during rain storms.

- No solid wood fences or other tall structures that block visibility of surrounding areas from owls should be erected within 10 feet of a burrow.

Posting can be an effective way to reduce encroachment within recommended buffers, to minimize disturbance, and to reduce the probability of burrow collapse. However, it is important to remember that burrowing owls prefer open areas and require adequate visibility to see and avoid predators. The FWC recommends using only as much posting as is necessary to address potential sources of disturbance. In some cases, posting may actually be detrimental by attracting attention to areas that might not otherwise be disturbed.

construction from encroaching upon a burrow. In these instances, use silt fence on the uphill side,

but avoid completely encircling burrows with silt fencing whenever possible.

Educational signage also can be posted to reduce the probability of disturbance. Care should be taken to place signage in a manner that maintains visibility for burrowing owls and is far enough away for people to read the sign without approaching too close to the burrow. Interested groups can obtain burrowing owl signage by contacting the FWC’s Species Conservation Planning staff at the Southwest Regional Office, 863- 648-3200, or South Regional Office, 561-625-5122. Contacts for other regional offices are available on the FWC’s website. Signs and postings should only be put up with the property owner’s permission. 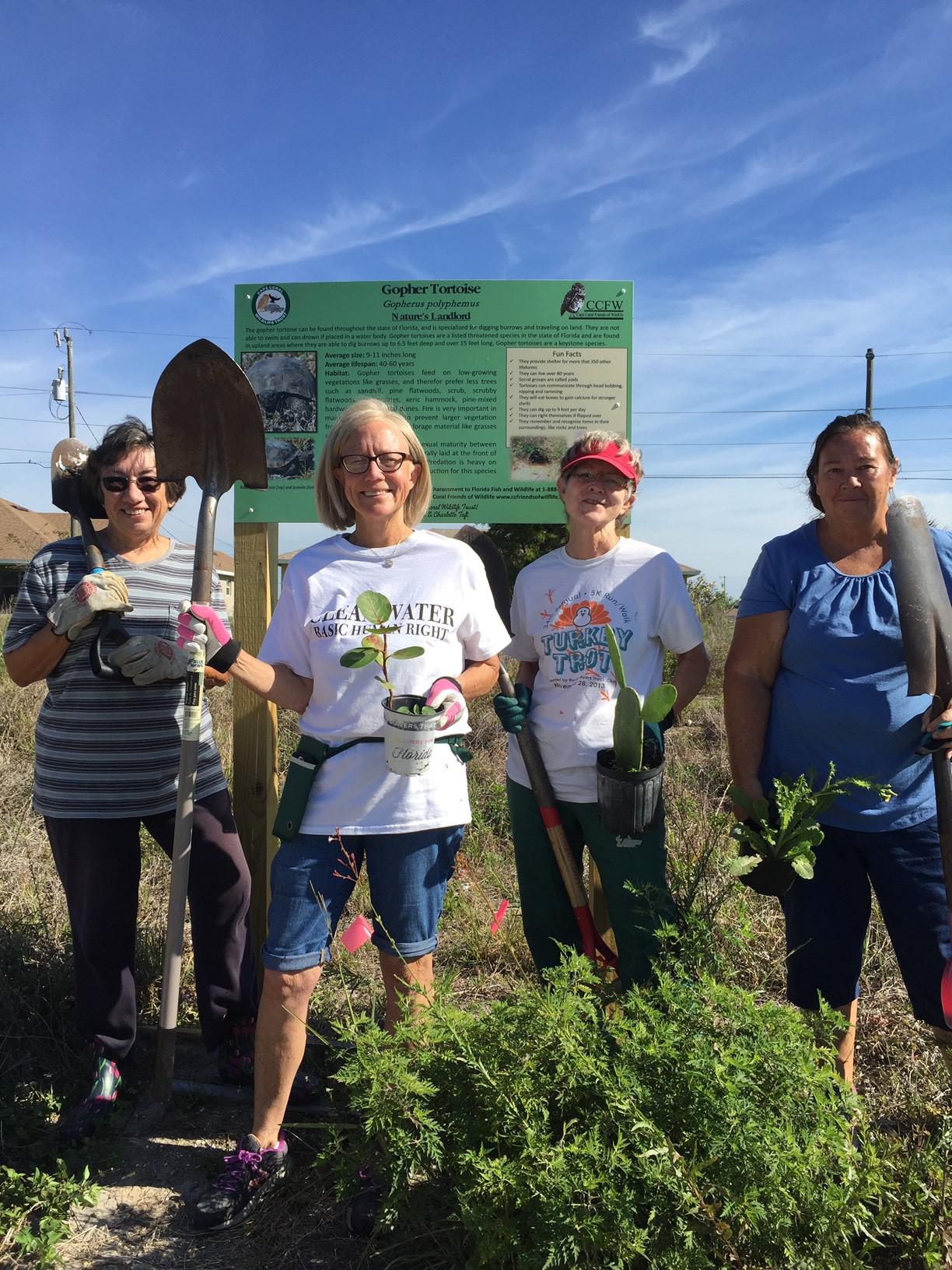 CCWT: Team effort to educate the public with a new sign on a new land purchase 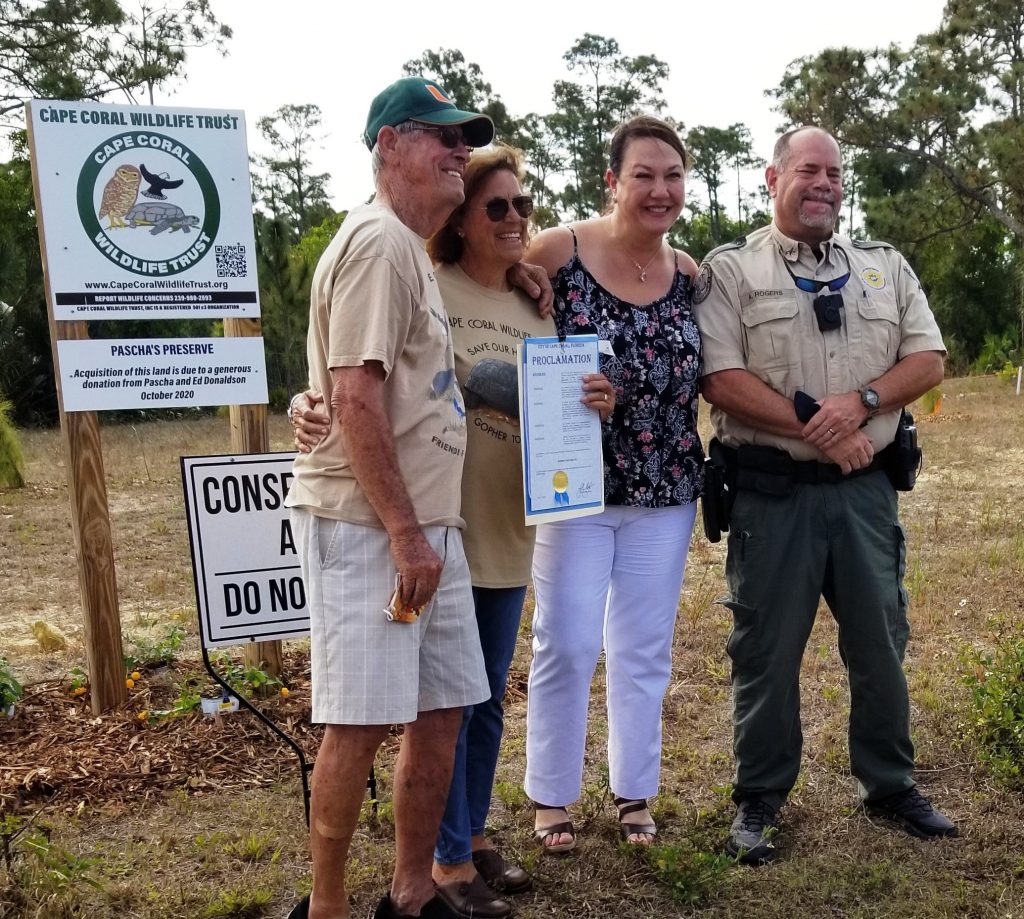 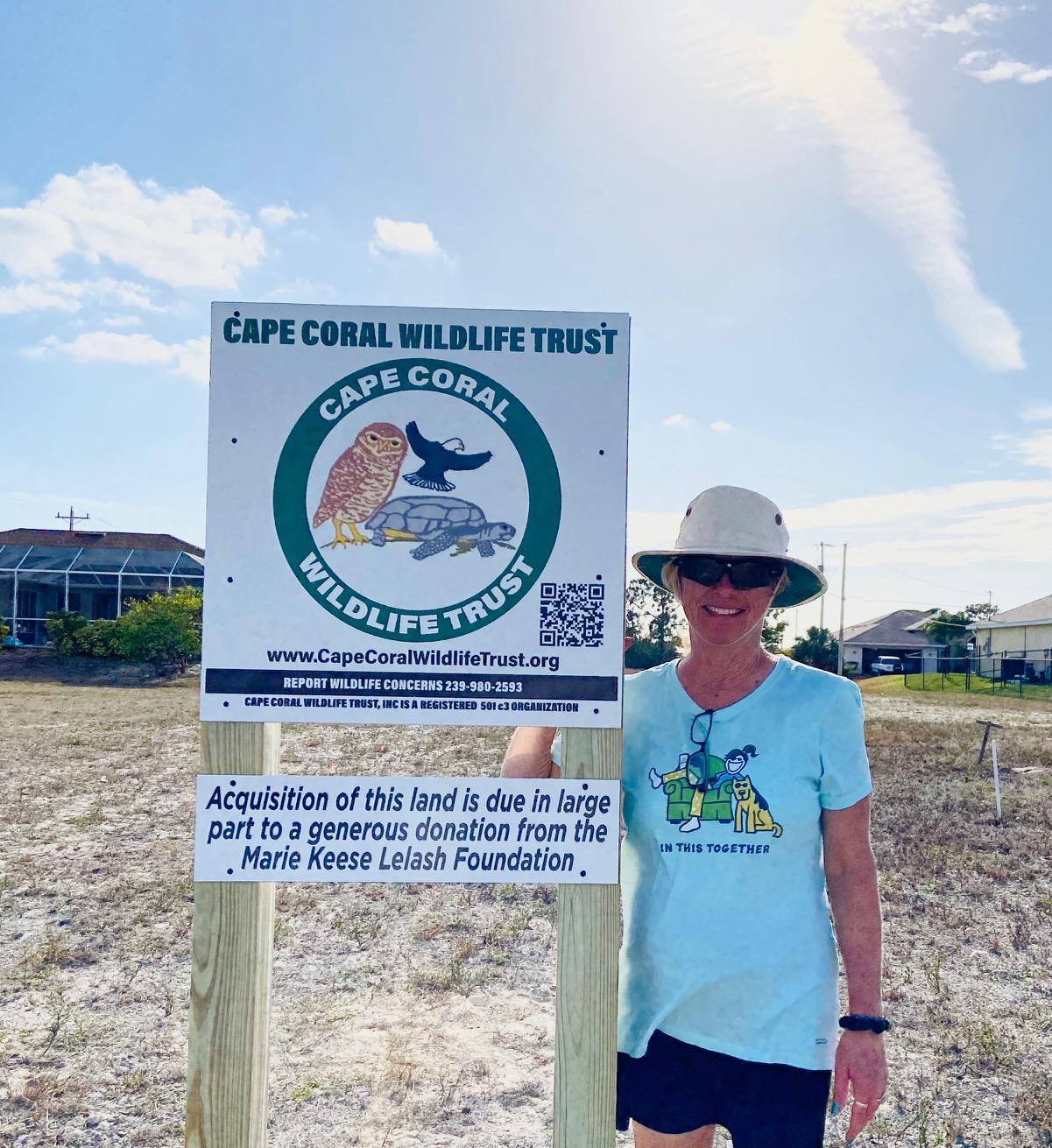 Our newest sign acknowledges the donation from the Marie Lelash Trust 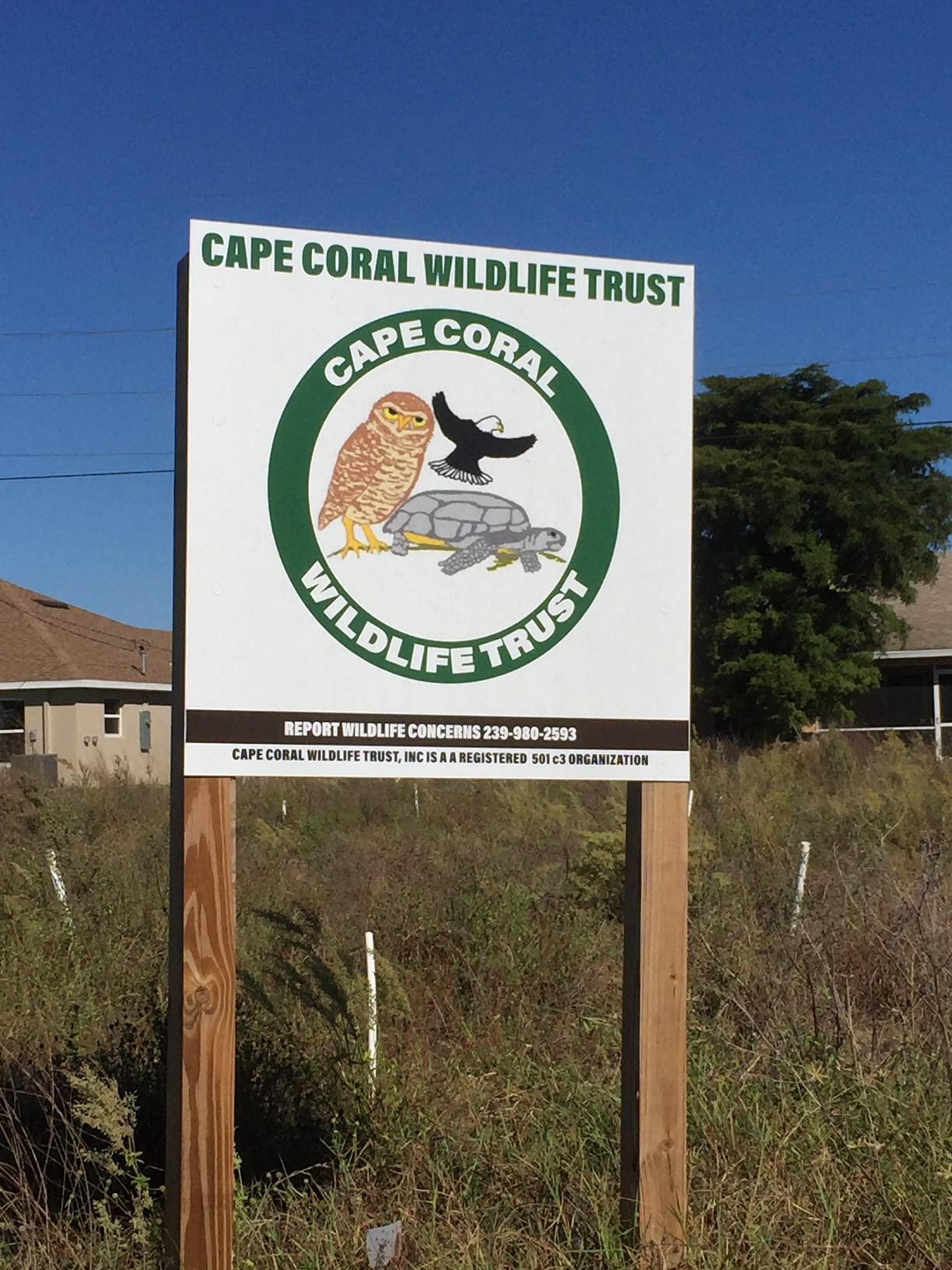 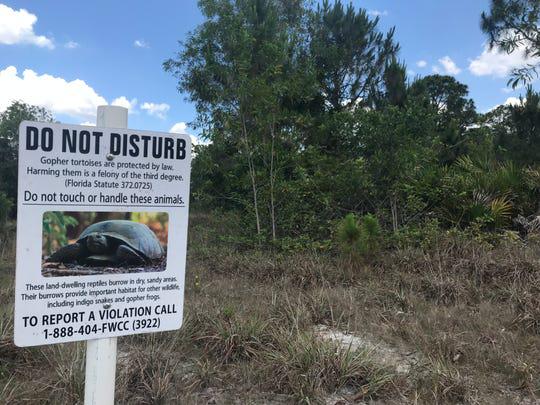 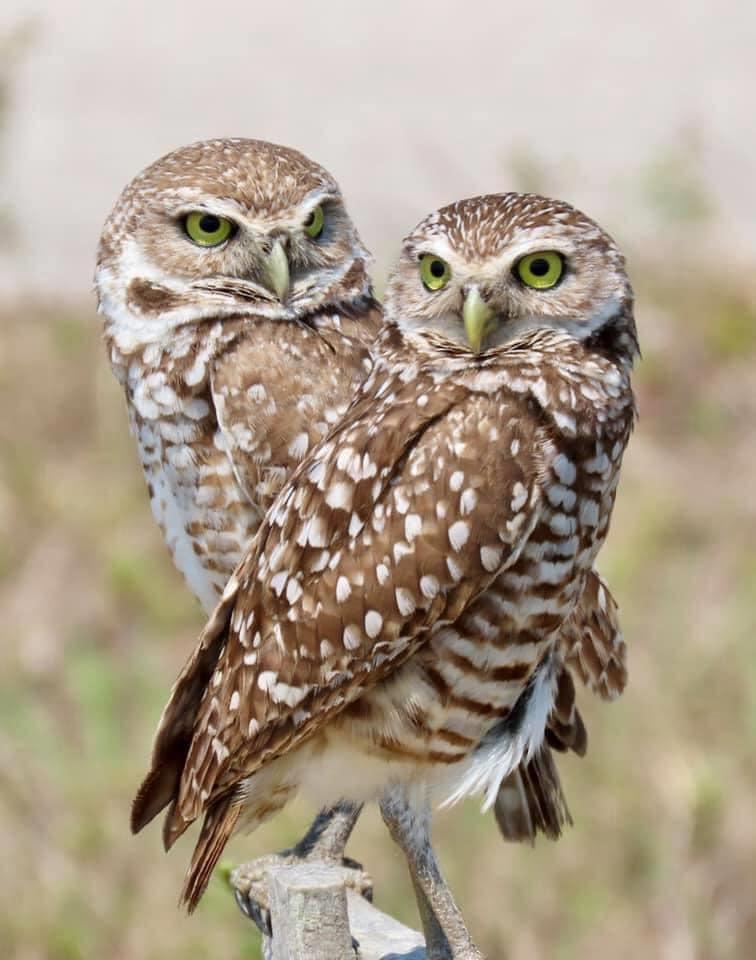 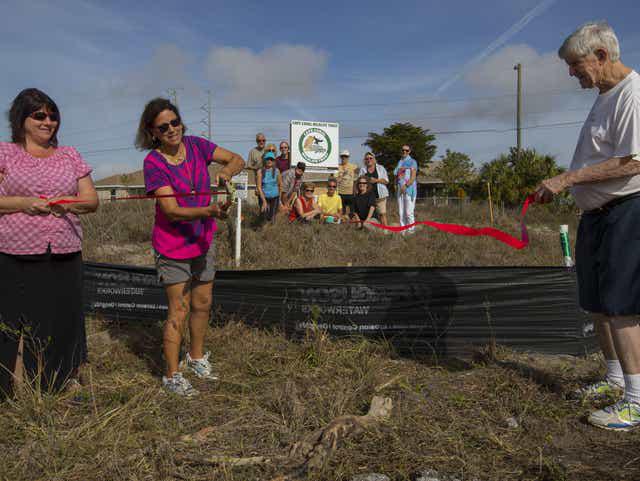 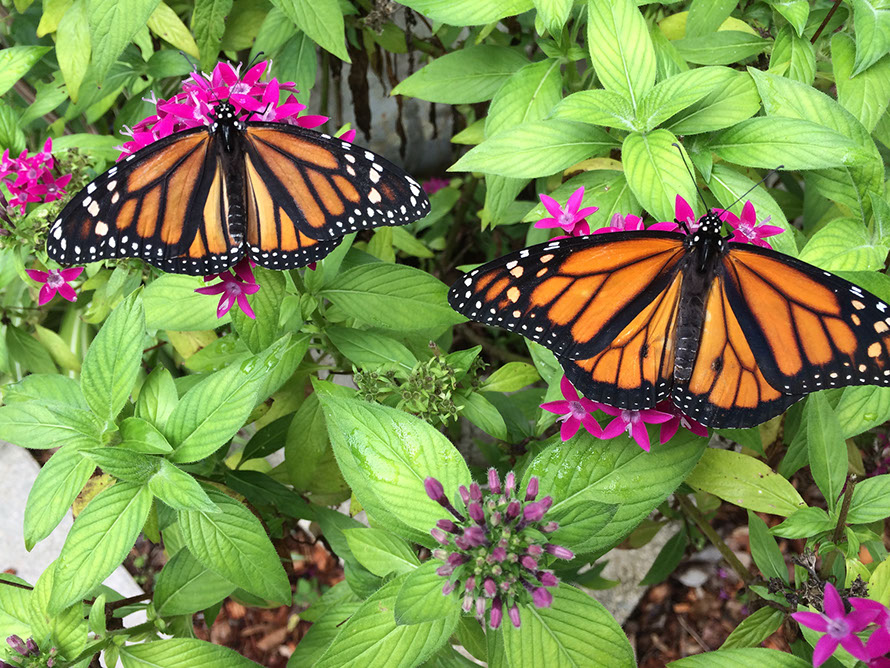 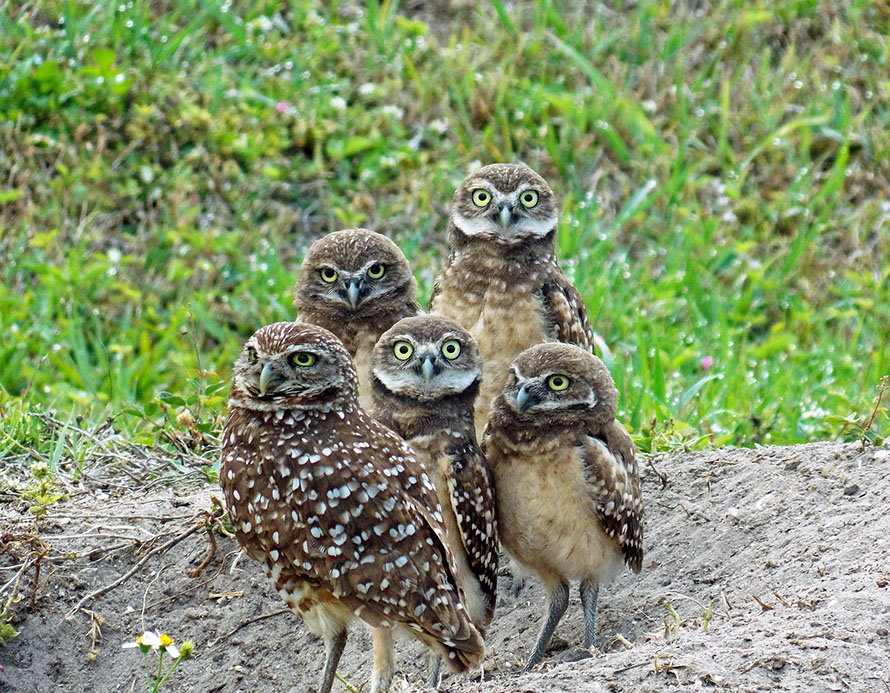 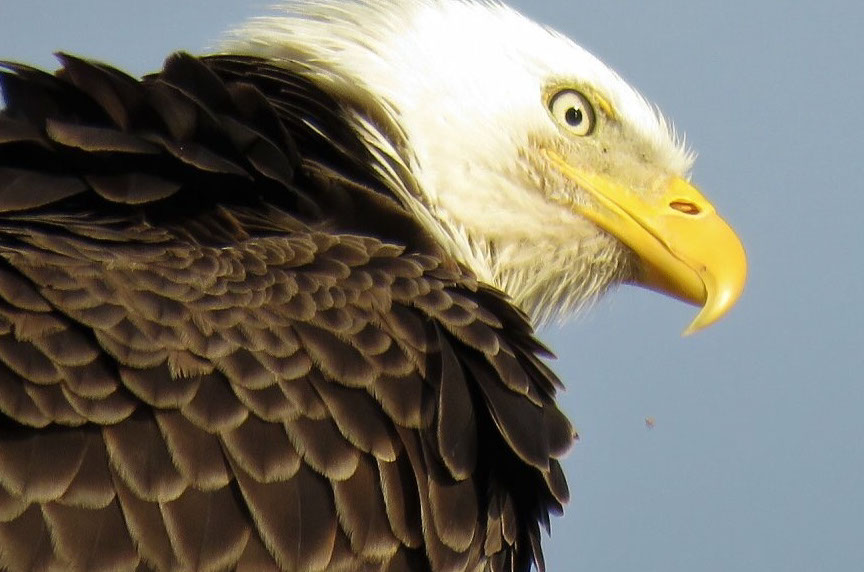 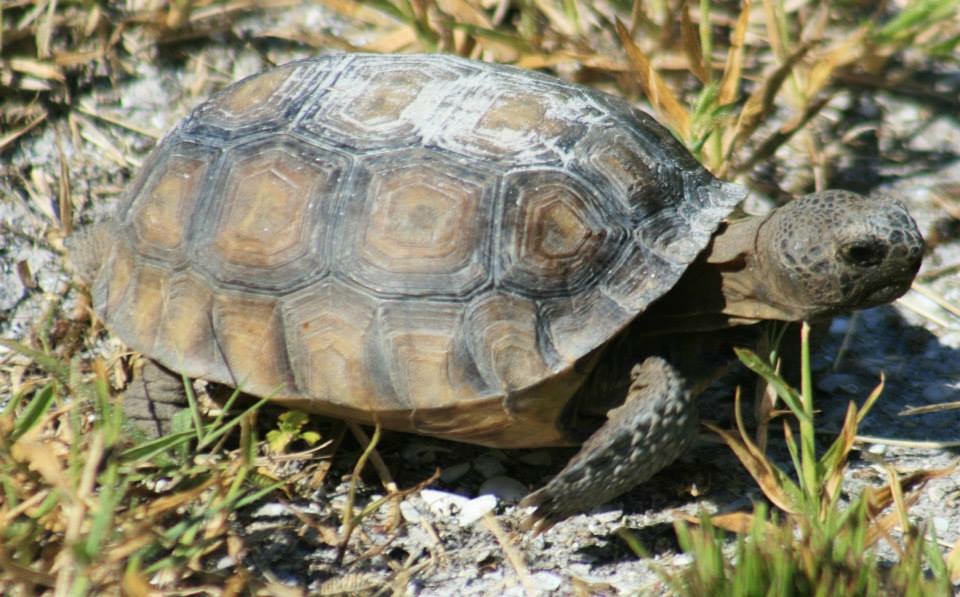 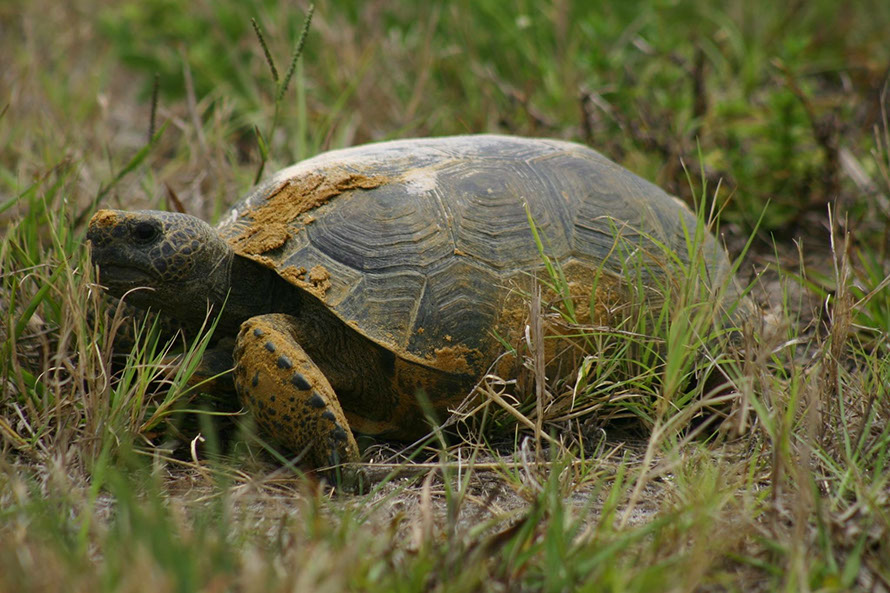 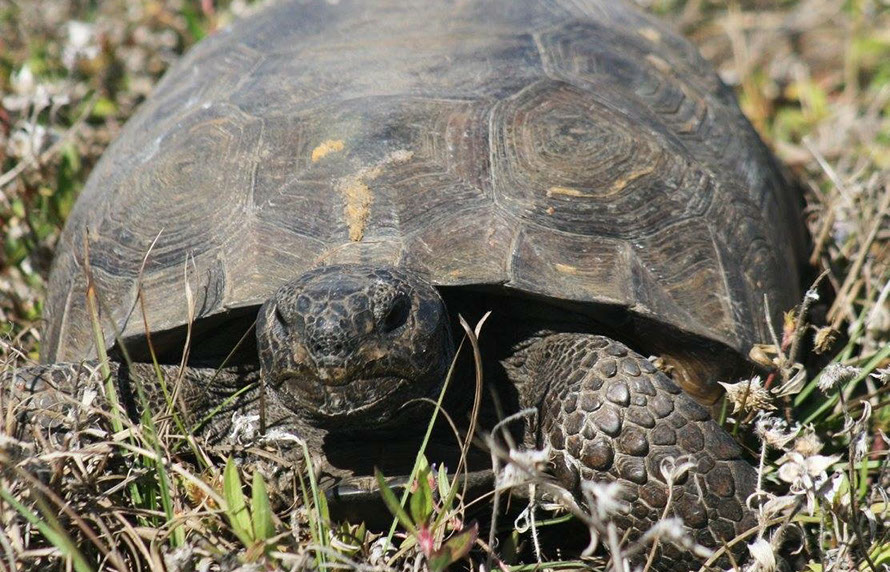 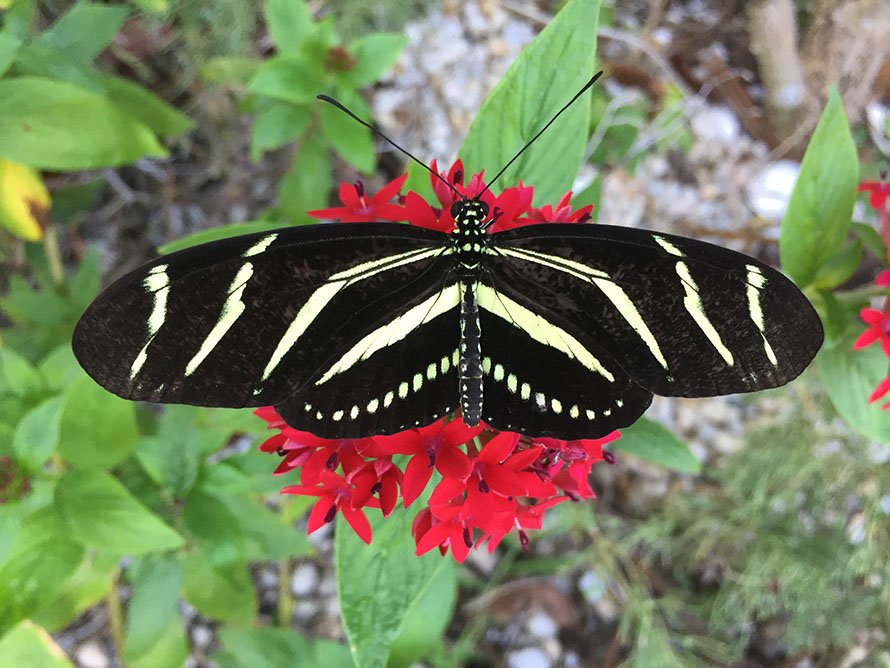 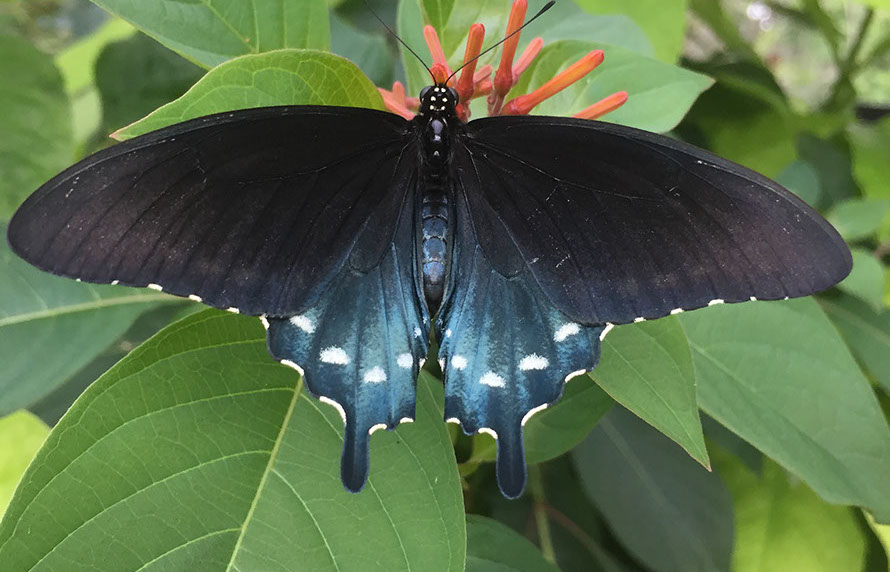 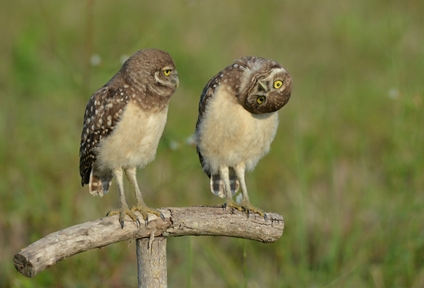 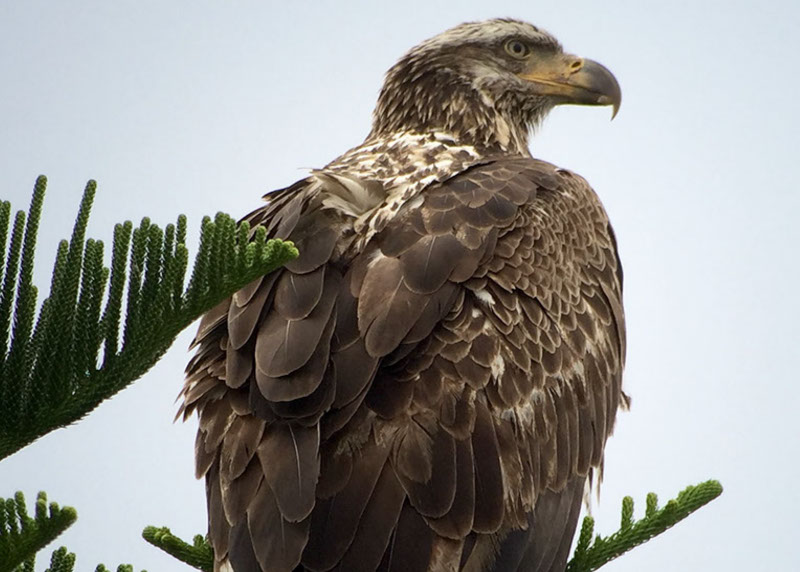 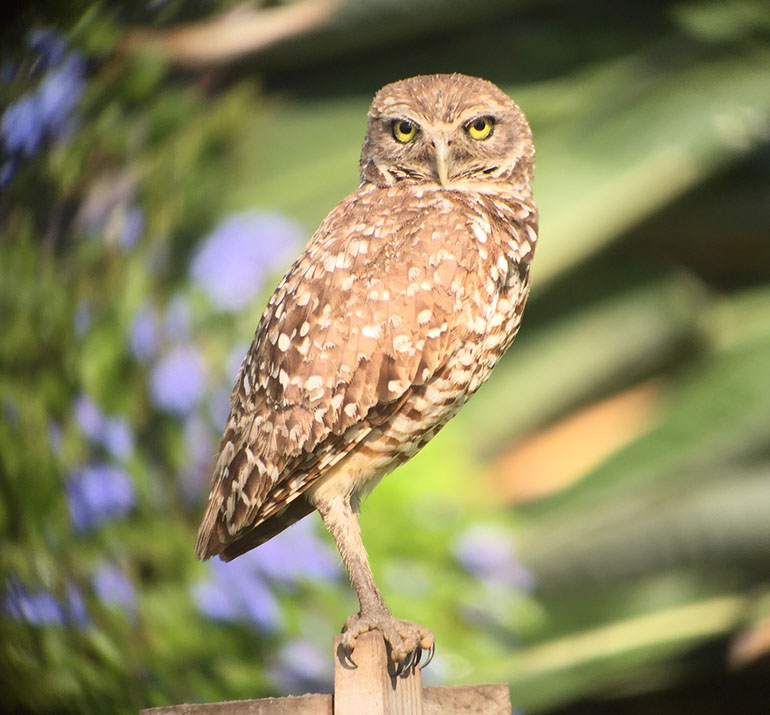 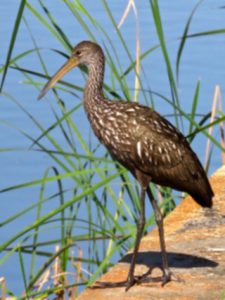 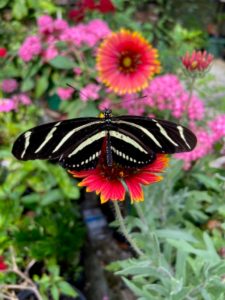 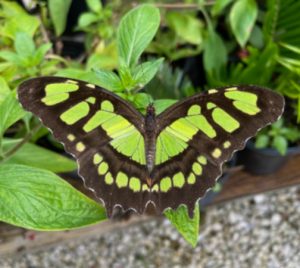 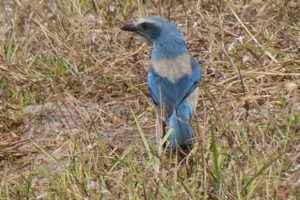 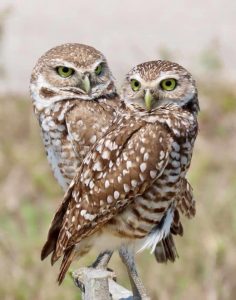 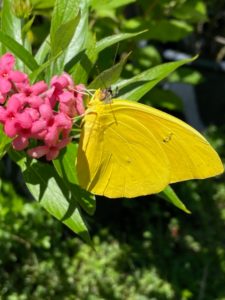 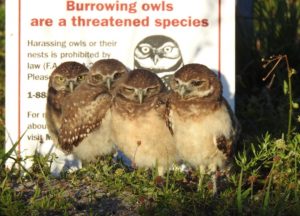 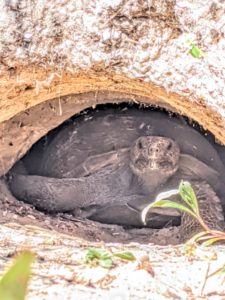